Bioaerosol sampling for the detection of aerosolized influenza virus 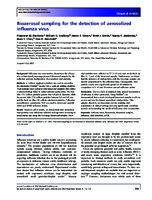 Bioaerosol sampling for the detection of aerosolized influenza virus

A Collison single-jet nebulizer was used to aerosolize the attenuated FluMist vaccine into a calm-air settling chamber.

Influenza virus was used to characterize the efficacy of a cyclone-based, two-stage personal bioaerosol sampler for the collection and size fractionation of aerosolized viral particles.

A Collison single-jet nebulizer was used to aerosolize the attenuated FluMist vaccine into a calm-air settling chamber. Viral particles were captured with bioaerosol samplers that utilize 2 microcentrifuge tubes to collect airborne particulates. The first tube (T1) collects particles greater than 1.8 microm in diameter, while the second tube (T2) collects particles between 1.0 and 1.8 microm, and the back-up filter (F) collects submicron particles. Following aerosolization, quantitative PCR was used to detect and quantify H1N1 and H3N2 influenza strains.

Due to a lack of empirical data, aerosol transmission of influenza is often questioned. Using FluMist, we demonstrated that a newly developed bioaerosol sampler is able to recover and size fractionate aerosolized viral particles. This sampler should be an important tool for studying viral transmission in clinical settings and may significantly contribute towards understanding the modes of influenza virus transmission.