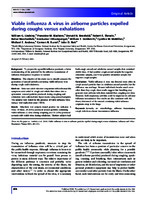 The objective of this study was to directly compare the generation of aerosol particles containing viable influenza virus during coughs and exhalations.

Sixty-one adult volunteer outpatients with influenza-like symptoms were asked to cough and exhale three times into a spirometer. Aerosol particles produced during coughing and exhalation were collected into liquid media using aerosol samplers. The samples were tested for the presence of viable influenza virus using a viral replication assay (VRA).

Viable influenza A virus was detected more often in cough aerosol particles than in exhalation aerosol particles, but the difference was not large. Because individuals breathe much more often than they cough, these results suggest that breathing may generate more airborne infectious material than coughing over time. However, both respiratory activities could be important in airborne influenza transmission. Our results are also consistent with the theory that much of the aerosol containing viable influenza originates deep in the lungs.