Use of Ebola Vaccine: Recommendations of the Advisory Committee on Immunization Practices, United States, 2020 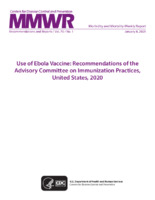 Use of Ebola Vaccine: Recommendations of the Advisory Committee on Immunization Practices, United States, 2020

This report summarizes the recommendations of the Advisory Committee on Immunization Practices (ACIP) for use of the rVSVΔG-ZEBOV-GP Ebola vaccine (Ervebo) in the United States. The vaccine contains rice-derived recombinant human serum albumin and live attenuated recombinant vesicular stomatitis virus (VSV) in which the gene encoding the glycoprotein of VSV was replaced with the gene encoding the glycoprotein of Ebola virus species Zaire ebolavirus. Persons with a history of severe allergic reaction (e.g., anaphylaxis) to rice protein should not receive Ervebo. This is the first and only vaccine currently licensed by the Food and Drug Administration for the prevention of Ebola virus disease (EVD). These guidelines will be updated based on availability of new data or as new vaccines are licensed to protect against EVD.

ACIP recommends preexposure vaccination with Ervebo for adults aged ≥18 years in the U.S. population who are at highest risk for potential occupational exposure to Ebola virus species Zaire ebolavirus because they are responding to an outbreak of EVD, work as health care personnel at federally designated Ebola treatment centers in the United States, or work as laboratorians or other staff at biosafety level 4 facilities in the United States. Recommendations for use of Ervebo in additional populations at risk for exposure and other settings will be considered and discussed by ACIP in the future.