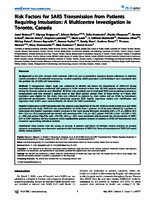 In the 2003 Toronto SARS outbreak, SARS-CoV was transmitted in hospitals despite adherence to infection control procedures.

In the 2003 Toronto SARS outbreak, SARS-CoV was transmitted in hospitals despite adherence to infection control procedures. Considerable controversy resulted regarding which procedures and behaviours were associated with the greatest risk of SARS-CoV transmission.

A retrospective cohort study was conducted to identify risk factors for transmission of SARS-CoV during intubation from laboratory confirmed SARS patients to HCWs involved in their care. All SARS patients requiring intubation during the Toronto outbreak were identified. All HCWs who provided care to intubated SARS patients during treatment or transportation and who entered a patient room or had direct patient contact from 24 hours before to 4 hours after intubation were eligible for this study. Data was collected on patients by chart review and on HCWs by interviewer-administered questionnaire. Generalized estimating equation (GEE) logistic regression models and classification and regression trees (CART) were used to identify risk factors for SARS transmission.